While in in California, in the bay area, I had a powerful significant vision. This vision was very vivid. It was as if God had taken hold of my mind and brought it to another place. I had no control over it for the few seconds that this vision had lasted.


As I was resting in my van one night, praying and meditating on the bay area I was in, I had a vision of the Oakland Bay Bridge. At the time, I was parked in a suburb of Berkeley. This Oakland Bay Bridge is the double decker bridge that was, back in the 1990's, hit by the quake that was shown all over national news, sections of it collapsed with cars and people crushed from it. In this vision however, what I saw was the bridge was completely collapsed and all that I saw that was left from the mega quake was a pillar with mangled concrete and rebar. Both levels of the bridge were gone! 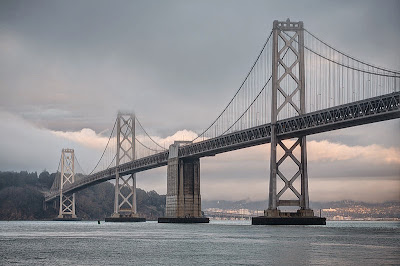 I was in shock. I had never had a vision as powerful and vivid like this before. Soon after, I had thought of that dream where 3 brothers in one night had the same dream of the Golden Gate Bridge starting to collapse, buildings toppled and masses looking for shelter.


When the mega quake strikes, both the Golden Gate and the Oakland Bay Bridges will be ruined. People inside San Francisco will be trapped inside the city which will lay in ruins from the mega quake. Let us pray that they remember this prophetic word, wake up to the tsunami warning sign when it comes and realize, they do not have much time to get out of there before the mega quake hits.
God help the people of California to be warned!
In Christ, Weather